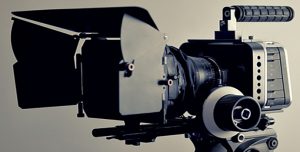 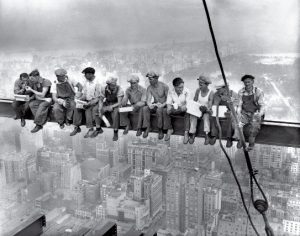 The famous Lunch Atop a Skyscraper (1932) was taken during the construction of the Rockefeller Center in Manhattan, New York City.

Building and manufacturing has always been an important part of America’s identity. In 1932, this sentiment was captured in an iconic photograph that featured a group of ironworkers enjoying their lunch while perched on a steel beam overlooking New York City. However, that’s far from the only time manufacturing and popular culture have intersected. In fact, just a few years later, the legend of Rosie the Riveter served as an inspiration and much-needed morale boost when our involvement in World War II intensified.

Now, let’s narrow the scope a bit and focus specifically on welding. The history of welding has been traced as far back as 4000 B.C. in ancient Egypt, making it one of the oldest and most fundamental joining processes in the development of civilization. While there may not be a famous picture or poster that comes to mind when the average person thinks about welding, the fact is, welding has gotten a lot of love in the most unlikely of places: television and film. There is a long history of welding in film, and the fascination is ongoing. 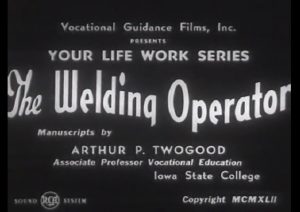 Screenshot of the title card for an educational video on welding produced in 1942.

While many of our readers probably remember Flashdance, the box-office hit about a young woman’s road from steel mill welder to ballet dancer, it is by no means the only movie to feature welding. The decade-long barrage of extremely popular Marvel superhero films began with Iron Man, where we see Tony Stark welding his first suit of armor in the film’s opening act. There’s also The Underwater Welder, an upcoming film adaptation of the eponymous graphic novel by Jeff Lemire, starring A-lister Ryan Gosling in the titular role.

Welding is even prevalent in films and television shows set in the future. If you’re interested in welding or Star Wars, chances are that you remember Chewbacca repairing the Millennium Falcon in The Empire Strikes Back. While set long ago, the implicit message was that welding will always be an important part of not only our galaxy, but galaxies far, far away as well.

Screenshot of an operator welding the U.S.S. Enterprise in the Star Trek (2009) trailer.

The presence of welding in popular culture is fun, but perhaps it can also have a serious impact on inspiring the next generation of welders. As baby-boomers retire, new technologies arise, and the manufacturing and construction industries continue to thrive, there are simply not enough skilled welders to keep up with demand. Maybe seeing a cool, capable character welding on-screen can inspire someone to pick up a torch and see what welding is all about.

As part of the celebration for National Welding Month, AWS Learning put together a video showcasing instances of welding and other related processes in popular culture. We hope you enjoy it!

As part of the celebration for National Welding Month, AWS Learning put together a video showcasing instances of welding and other related processes in popular culture. We hope you enjoy it!

So, do you think welding is accurately portrayed on the silver screen, or does Hollywood get it all wrong? What’s your favorite depiction of welding in movies and TV? Did we miss a good one? Comment below and let us know!