STATEMENT OF SUPPORT FOR UKRAINE

Welding and the Society

With the United States' entry into WWI in 1917, American's industry was called upon to produce war and transport ships in quantity and with speed. A newly emerging metal joining process, welding, was tapped to help industry meet its goals. To ensure that industry took advantage of this new technology, President Woodrow Wilson called upon a Harvard professor, Comfort A. Adams, to chair the Welding Committee of the Emergency Fleet Corp.

The first annual dinner of the American Welding Society was held April 26, 1922, at Reisenweber's in New York City.
Welding performed well in the war effort and its success motivated Adams in 1919 to bring together industry leaders for the purpose of merging together the Welding Committee of the Emergency Fleet Corp. and the National Welding Council into a new organization, the purpose of which was to provide dependable and objective information on the developing technology of welding. On March 28, 1919, the American Welding Society was born for that purpose. That first year saw the Society grow to 217 members; introduce the Journal of the American Welding Society, a technical publication with a life of one issue, but the precursor of the Welding Journal; find a home in the Engineering Societies Building in New York City; and establish the foundation of the Society, the committee system, for the production of its operating procedures and industry standards on welding. In 1920, the first local Section was organized in Philadelphia, Pa.

Attendees at the Society's first Annual Meeting, held April 26-28, 1922, were told of the formation of Sections in eight cities, and also, the Society had established its own permanent publication, the Journal of the American Welding Society. But all wasn't rosy, as the members were told, "Owing to the business depression...The financial question is still a serious one, but even this is possible of a solution." The proposed solution was to get more members and solicit more advertising in the Journal. The financial report delivered at the meeting stated an income for fiscal year ending March 31, 1922, of $12,683.74. The budget for fiscal year 1922-23 was projected at $15,540.

In 80 event-packed years the Society has been the beacon for the advancement of the science, technology and application of welding. Through the eyes of the Welding Journal, we look back at some of the events in welding and milestones in the history of the Society.

There was a cost, though, of providing that information to its members, and a way of defraying those costs was sought. Advertising became the means as was explained in an April, 1922, issue. "Advertising is included in our Journal because there are not sufficient funds available from other sources to defray the expense of publication. The dues from members...is barely sufficient to pay the ordinary expenses of the Society. Unless we can secure additional advertising, it will be impossible to continue issuing a journal each month..."

(right) The face of the official publication of the American Welding Society has changed many times over the first 80 years, but its mission of disseminating the latest in technical knowledge on the state of welding has not. The first sustained monthly publication of the Society was begun in 1922 and has remained uninterrupted to this day.

A nation at war turns to its technology to produce the material necessary to execute a successful end to its conflict, and in so doing pushes that technology into new applications and discoveries. During WW II, welding was one of those technologies that was called upon to perform at its best. 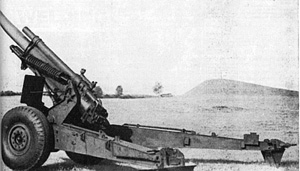 The carriage of this 155-mm Howitzer was of all-welded construction.

In a 1943 article "Welded Weapons in War," Col. Scott Ritchie of the Ordinance Department extolled the merits of welding in the war effort when he said, "...welding has done much to keep us above and ahead of the enemy." He went on to note, "Welding enters into a large percentage of more than 1700 different weapons...furnished to our fighting forces." He also recognized the versatility to fabrication welding afforded when he said, "...it is a powerful tool for producing weapons, which otherwise could not be produced." Welding came out of the war years as a growth technology, replacing riveted construction in much of metal fabrication. 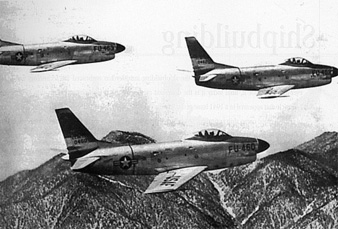 F-86D sabre jets saw action in the Korean War, and brazing with a BNiCr alloy was used extensively in their General Electric J-47 jet engines.

Nicknamed the "Priest" because of the pulpit appearance of the machine gun mount, this 105-mm howitzer self-propelled artillery motor carriage had extensive welding in its fabrication. 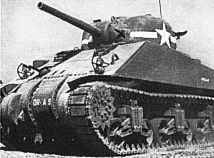 The M4 medium tank (above) played an important role in the Allies' effort to regain control in North Africa, as well as other campaigns during WWII. The change over from riveting tanks to welding of both armor plate and castings was complete by 1943.

Since the earliest days of welding, the shipbuilding industry has embraced the technology and found ever-more uses for it, until today it is the dominant method of metal fabrication used in ship construction.

An article that appeared in a 1941 issue of the Journal titled simply "All-Welded Ships" detailed the construction of an all-welded cargo ship noting that after consultation with the contractor, the Maritime Commission and the American Bureau of Shipping, "...we chose to go all welded, using no rivets any place in the ship, and departing as much as conditions permitted from the practice of using a riveted design and merely substituting welding for riveting.

The extensive use of welding in shipbuilding also brought to light a reoccurring cracking problem, which initiated intense and comprehensive studies to determine its cause. Eventually hydrogen was found to be the culprit, leading to the development of low-hydrogen electrodes and standard precautionary methods to prevent hydrogen entrapment in weld metal.

The diesel-powered cargo ship American Press, contracted by the United States Maritime Commission, was chosen to be an all-welded vessel because welding was considered the most economical means of construction, as well as a means of simplifying detailing and reducing overall weight.

An after-section of a tanker that broke in two at sea (below). Studying structural failures in welded ships such as these led to a wealth of knowledge in fracture mechanics and the development of new welding electrodes and techniques to prevent it from happening in the future.

A fleet of commercial fishing vessels (above) experienced the advantages of the antifouling characteristics of copper-nickel when 3/16-in. hull plates of Alloy 706 were welded to their carbon steel frames with ENiCu-2 covered electrodes and then welded to each other with 70-30 copper-nickel electrodes. 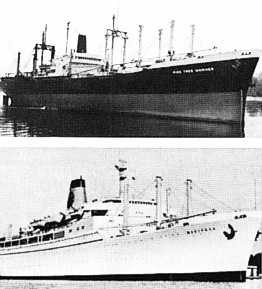 The versatility of welding was instrumental in converting the rugged freighter Pine Tree Mariner (above left) into the luxury ocean liner Mariposa (left) whose ports of call were exotic locales in the South Seas.