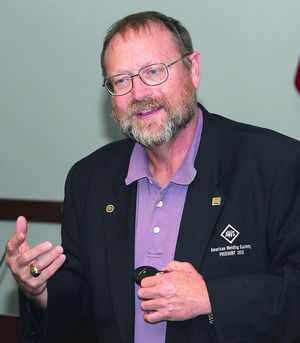 When it comes to finding appreciation for the art of welding, David Landon doesn’t have to look any further than Hollywood.

On Wednesday, Landon, the 2015 president and chairman of the board of the American Welding Society (AWS), addressed members of the Siouxland Section and members of the general public at RTEC with a talk entitled "A Triple Pass of the Torch: Technology, Heroism and Mentorship."

Landon delved into his favorite subject next to welding – his love of superhero movies, particularly Marvel’s "Iron Man" films.

"Isn’t that cool?!" he exclaimed gleefully after showing a clip of Tony Stark being outfitted in his "Iron Man" suit. "As a manufacturing guy, I get off on that!"

"For me, it’s the technology," Landon said. "I love to watch the toys they play with."

Landon believes these movies show the technology that’s evolving today, albeit in a futuristic sense, from things like lasers to 3-D printing.

"When I started welding, it was considered to be a dark, scary and dangerous occupation, but today that has changed," he said. "The technology that’s in welding is right out of superhero movies."

All these technological advances wouldn’t have become possible without welders being taught and supported by mentors – or heroes, as Landon referred to them.

The plethora of heroes in Landon’s life included his father, brother and college professor.

When struggling to decide which job offer to accept after his college graduation, his father told him, ‘You could be a big fish in a small pond or a small fish in a big pond.’ Landon chose the latter option "so I could work under more experienced people and learn from them," he said.

Landon credits his brother for introducing him to welding.

Landon fondly recalled a professor he had all throughout his college years who taught him what it was to truly be a welding engineer. This professor never missed a day of class, even when he had to teach his classes from a webcam as he was in the hospital dying of cancer.

"At almost every talk I give, a student asks me, ‘What piece of advice would you give me as I’m pursuing a career in welding?’" said Landon, who resides in Pella, Iowa. "My response to that is the same response I would give to any student – it’s not just related to welding – and that is to find a professional organization that is focused around the career that you’re pursuing and become a member."

According to Landon, there are three steps to this: Identify the organization, become a member and become active.

"Being active is a lot more than just paying your dues," he said. "When you become active, you start receiving some of that value."

This is evidenced by Landon’s current role as president in the AWS, an organization he is proud to be a part of, he said.

"The strength of AWS is the society is made up of volunteers," he said. "All the products we publish are all developed by volunteers."

Lastly, Landon concluded his presentation with some important life advice.

"Everyone in this room has an incredible opportunity," he said. "On Dec. 18, go see the new ‘Star Wars’ movie and take someone with you. There’s going to be some incredible technology. When it’s done, share with them your knowledge about the technology we can achieve from welding and manufacturing."

Hi there, we're here to help you.

AWS Members who wish to order AWS merchandise in quantity (12 or more) receive special pricing through our partnership with Staples. For more information, please contact Keila DeMoraes at 1-800-443-9353 Ext. 444